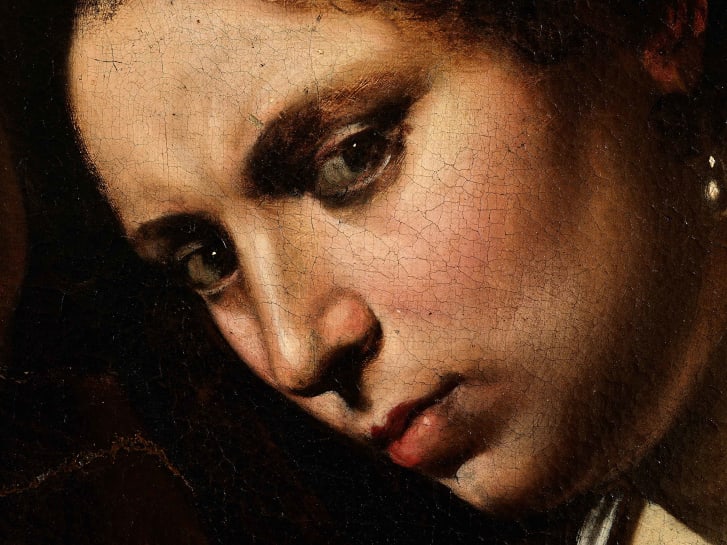 Cynthia de Giogio, CEO and Curator of St John’s Co-Cathedral authored the article about the painting ‘Judith Beheading Holofernes’ by Caravaggio, which was recently sold in France. The article was originally published on The Times of Malta | Escape, on May 1, 2016.

The painting depicting Judith Beheading Holofernes discovered recently in an attic in France has been declared to be a work by Caravaggio. The attribution has caused considerable and deserving controversy. But some stylistic analysis of the work in comparison with Caravaggio’s style and technique poses some interesting observations and questions.

Speaking to reporters, the painting expert Eric Turquin said it could be worth as much as €120m, describing the work as having “the light, the energy, typical of Caravaggio, without mistakes, done with a sure hand and a pictorial style that makes it authentic”. While other specialists have questioned its provenance, Turquin was backing by Caravaggio expert, Nicola Spinoza, former director of the Naples museum. In an expert assessment seen by Agence France-Presse, Spinoza wrote: “One has to recognise the canvas in question as a true original of the Lombard master, almost certainly identifiable, even if we do not have any tangible or irrefutable proof.”

Two Caravaggio experts he consulted attributed the painting to Louis Finson, a Flemish painter and art dealer who was familiar with Caravaggio. They say Finson possessed a number of works by the Italian master and made copies of his pictures. “But the third expert I met told me that it was not only a Caravaggio, but also a masterpiece,” Turquin said. “Judith Beheading Holofernes must be considered the most important painting, by far, to have emerged in the last 20 years by one of the great masters.”

But the French art newspaper Le Quotidien de l’Art quoted another expert on the artist, Mina Gregori, as saying that it was not an original, although she recognised the “undeniable quality of the work”. Dr John Spike, leading Caravaggio expert said that the painting is a version of a painting of ‘Judith’ in the Banco di Napoli collection in Naples which most scholars ascribe to Caravaggio’s friend and follower, Louis Finson. Turquin rightfully said there will never be a consensus about the name of the artist.

The new Judith painting has been dated to 1599 or there abouts. At that time Caravaggio had arrived in Rome after having spent an apprenticeship with Simone Peterzano who was a pupil of Titian which is where Caravaggio learnt the necessity of monumentality to create great art. But it was in the shadowy dark back streets of Rome that he would learn the greatest lesson. It was there that Caravaggio experienced reality; gambling, street fighting, wine bottegas and the colourful characters that one encounters on the wild side of life. His greatest invention was to apply Titan’s monumentality to the backstreet characters he encountered, by placing them in biblical scenes. By using his signature chiaroscuro, that is modeling with light and shade and the use of luce del cantina, he recreated the dramatic scenes that he experienced in his works. He did this with such perfection that he even inspired poets.

The Article published ‘The Elusive Caravaggio’ on May 1, 2016, The Sunday Times of Malta | Escape

With these key principles in mind, the new painting depicting Judith seems to lack certain stylistic characteristics of a work by Caravaggio. By 1596 Caravaggio was hosted in the palace of Cardinal Francesco del Monte for whom he had painted several works including the’ Young Musicians’. Then in 1599 Caravaggio got his first major public commission, the embellishment of the Contarelli Chapel, three awesome paintings depicting scenes from the life of St Matthew. This event was an important landmark for Caravaggio, it was when his painting start to take on a more serious mood, he stops using the pretty-boy type of the Young Musicians and starts using more realistic and startling personalities as his characters. His works became more violent and filled with a sense of foreboding – that feeling something terrible is happening or going to happen is in almost all his works.

The most appropriate comparison to study the new Judith is the ‘Judith beheading Holofernes’ that hangs in the Palazzo Barberini in Rome. The Barberini painting is dated to 1598 making it very close to the new Judith in its production. This comparison shows some stylistic differences. There are qualities in the Barberini Judith that are Caravaggio’s signature characteristics, that seem to be absent in the new Judith. One intrinsically important feature is the lack of connection between the old maid and Judith. Caravaggio’s characters always consciously or subconsciously engage with each other psychologically, bonding by their body language or gaze and gesture. The new Judith loosely holds Holofernes’s head and self-consciously looks out of the painting and makes eye contact with the viewer and ignoring the maid. While carrying out such a horrific task, why would she be looking at someone else? By contrast, the Barberini Judith rolls up her sleeves, firmly grasping Holofernes’s head with one hand and exerting all the force with the other causing her to frown as she concentrates fully on the ardent task she must carry out swiftly. She has no time to waste posing for the viewer, that’s realism. Besides, Caravaggio rarely got his protagonist to look out at us: he left that behind in his early works. Caravaggio does not get his characters to engage with the viewer intentionally, it is a key feature that gives his works a sublime feeling, by making the spectator feel awkward like an intruder, as though you stumbled upon the scene by accident. Caravaggio wants you to feel that you are witnessing the horror that takes place before you. The new Judith is dressed like a widow, because she was, according to the story in the bible but it is still a questionable feature. She does not look like a woman who has just seduced Holofernes and is unlike the Barberini Judith who wears a party frock instead and coffers her hair in such a way to reveal her sensual neck and pearl drop earrings. Also here the maid is perfectly coordinated with Judith and is timing the moment she will catch the bloody severed head of the cruel general. Although contrasting youth and old age was one of Caravaggio’s artistic tools, in the new Judith it is somewhat over done, whereby the maid is excessively wrinkled and as yet lacks the hardened qualities of an accomplished partner in crime seen in the Barberini Judith.
The last question: is the new Judith, Fillide? the attractive young upper class courtesan with a heart-shaped face who served as Caravaggio’s model in the Barberini Judith of 1598? Fillide was Caravaggio’s model consistently till 1605, as St Catherine one day and Judith the next, and without any attempt at disguising her. The new Judith does resemble her but she lacks the seductive manner Caravaggio so blatantly captured.

Another feature is the quality of light. In the new Judith there is too much of it, falling almost evenly on the protagonists and filling the background with light leaving little sense of the mysterious illegible dark areas creating a sense of unease, a quality found in Barberini Judith and almost all of his later works. But artists did change their style and iconography at time, especially one would expect that from the likes of Caravaggio known for his eccentric character, however he rarely did, that’s why some of his commissioned paintings were actually refused by their patrons. Louis Finson the Flemish artist, both friend and close follower of Caravaggio was certainly talented, this could attest to why the new Judith’s style and iconography is so close to that of his master. Yet he was not nearly as creative as his friend or able to understand the motions of the mind like Caravaggio did. But surely the most important procedure to be carried out would be a very close examination of the brushwork, use of highlights and other painting techniques and have them compared with those Caravaggio used in the same period. This study would certainly help to confirm whether the new Judith is by the famous hand of Caravaggio.