Walk on the most beautiful floor in the world.

The dawn of the seventeenth century brought in a new decorative style referred to as Baroque. During this century, a programme for the embellishment of the interior started when the walls were carved with elaborate motifs of gilded foliage and elaborate marble monuments that transformed the interior into a glowing gem of Baroque art.

The entire floor of the Church is covered with marble tombstones. They commemorate some of the most illustrious knights of the Order. Several of them were members of powerful aristocratic families of Europe. They ranked from grand priors, admirals and bailiffs amongst others, and were often referred to as Most Illustrious Lord Brother Illustrissimus Dominus Frater.

The Latin epitaphs describe the virtues of the individual knight. Each tombstone is charged with messages of triumph, fame, victory and death. Symbols, both ecclesiastical and profane are used in a vibrant visual language of colour and design. One of the most popular symbols is the image of death represented by a skeleton, often with a sickle and an hourglass signifying the passage of time. Another popular symbol is the angel of fame often represented blowing a trumpet to mark the deceased’s honourable reputation. Crowns and coronets indicate the most noble of the knights. The symbols are accompanied by armorial shields and weapons ranging from battle flags to halberds, helmets, and cuirasses. All the tombstones were made following original designs and composed of coloured inlaid marble. They date from the early seventeenth century to the late eighteenth century. 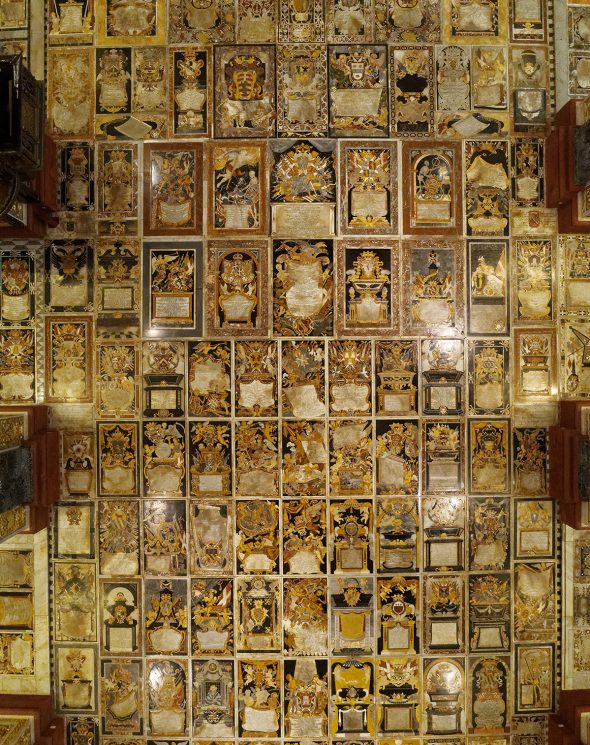 Tombstones covering the floor of the Main Nave at St John’s Co-Cathedral.

Take A Closer Look At The Inlaid Marble Tombstones

Within the Chapels there are several monuments commemorating important Grand Masters. The only funerary monument outside the chapels is that of Marc’ Antonio Zondadari which was installed in the Main Nave and not in the Chapel of Italy by Massimiliano Soldani-Benzi. In the Italian Chapel, one finds the monument of the Italian Grand Master Fra Gregorio Carafa.

The Chapel of France, there are three monuments of the French Grand Masters: Adrien de Wignacourt and Alof de Wignacourt and an impressive mausoleum dedicated to Emmanuel de Rohan. Within this chapel, there is a Neoclassical monument of the Vicomte de Beaujolais, the brother of King Louis Philippe of France by Jacques Pradier.

In the Chapel of Auvergne, one monument is dedicated to Grand Master Fra Annet de Clermont-Gessant, whose rule was short-lived.

In the Chapel of Aragon, one finds four beautiful monuments commemorating the Spanish Grand Masters: Raphael and his brother Nicholas Cotoner, the latter by Domenico Guidi, Martin de Redin and a magnificent monument by Giuseppe Mazzuoli to Grand Master Perellos.

The last chapel on the right-hand side belongs to the langue of Castile, Leon and Portugal. Here there are two fine monuments dedicated to two Portuguese Grand Masters – Manoel Pinto and Manoel de Vilhena, the latter by Massimiliano Soldani-Benzi.